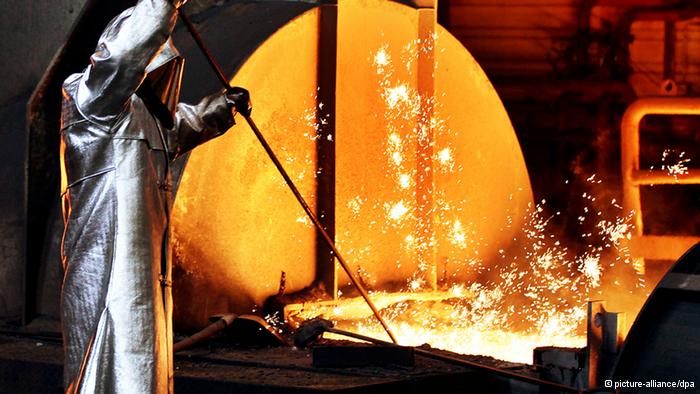 German steel production will return to modest growth next year as companies rebuild stocks and demand from the automotive and engineering sectors picks up, a trade group forecast on Tuesday.

Europe’s steel industry has been hit by a slowdown in demand for cars, appliances and new buildings as an austerity drive aimed at reducing budget deficits has hampered economic growth.

Germany, Europe’s biggest economy, has been one of the strongest performers, but is also struggling.

Its steel association sees German crude steel output edging up by 1 percent to 43.0 million tonnes in 2013, after a 4 percent decline this year, on the back of rising production of cars and factory equipment.

The automotive, engineering and construction industries account for almost 80 percent of steel consumption in Germany.

“But in the current general economic situation no drastic recovery of the steel sector is to be expected next year,” the association’s President Hans Juergen Kerkhoff said.

His comments echo gloomy forecasts by German steel companies such as ThyssenKrupp (TKAG.DE) and Salzgitter (SZGG.DE).

ThyssenKrupp axed half of its management board this month, including the head of its steel business, as it posted a steep loss due to an ill-advised foray into the Americas and saw profits at its European steel business slide.

Salzgitter, Germany’s second-biggest steel company, meanwhile has plans for what its Chief Executive Heinz Joerg Fuhrmann has called a “far-reaching” shakeup to reverse losses at its steel business.

“But overall, the economic environment remains difficult in 2013,” it said, adding it sees production of rolled steel products in Europe stabilising at a low level as the market in debt-laden southern European countries continues to shrink.

ABOUT US
BearingNEWS is an industry sector magazine and online platform; created out of the need and demand for finding specific answers and solutions in today's industrial environment where qualitative sources are not easy to find in 'the ocean' of information.

BearingNEWS gives an overview to power transmission, maintenance and bearing industry professionals, engineers and decision makers to find their specific answers and solutions by informing them on regularly base through digital and printed publications.
Contact us: info@bearing-news.com
FOLLOW US
© 2019 BEARING NEWS All rights reserved.